What is a Wisdom tooth extraction?

Wisdom tooth extraction is a surgical procedure done to remove one or more of your wisdom teeth.

What is a wisdom tooth?

Wisdom teeth also called as third molars are the four permanent adult teeth found at the rare corners of your mouth both on the upper and lower areas. These teeth are the last to erupt during 17 to 25 age period.

Why has it to be extracted?

During the growth of wisdom tooth, most often it does not have enough room to erupt, it results in infection or other related dental complications further causing immense pain. So to minimise this risk, extraction of the wisdom tooth is highly recommended.

How is the classification of wisdom tooth impaction done?

To distinguish the types of impacted teeth,  Dental practitioners use different terminology based on two main aspects.

One is based on the angulation of the impacted wisdom tooth and other on the type of the tissue (soft-tissue and bony).

a. Based on the angulation Wisdom tooth impaction is classified as

In this case, the third molar is positioned horizontally, and it exerts pressure on the subsequent molar. Out of all the type of impaction, Horizontal one is said to be the most painful. This type of extraction is considered to be critical, and an extraction is advised. It has to be operated by a well experienced oral surgeon. 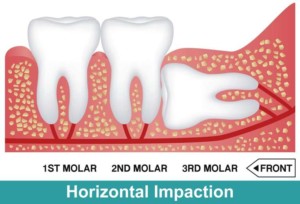 At Sujay’s Dental Care, an x-ray is adviced to determine the horizontal impaction. Generally, oral surgery is advised irrespective of the scale of the pain. As the horizontally impacted molar tooth cause damage to the adjacent molar teeth sooner or later, it is better to get it extracted.

In this case, the orientation of the wisdom tooth would be relatively normal. Dentists usually don’t suggest an extraction as the tooth’s orientation is near vertical. In most of the cases, it will erupt as any other normal teeth.

But in some exceptional cases, oral surgery may become necessary, as during the growth process it may exert pressure on the underside of the adjacent molar or the bony section of the jaw.

Distal impaction is one of the rare kind of impaction. In this case, wisdom tooth is oriented directed towards the back of the mouth.  The need for removal depends on the angulation of the tooth. If the distal impacted tooth is positioned at 0 degrees, then it usually erupts with a slight inclination. In this state, your dentist may take one to two years to decide whether the tooth to be extracted or not. In other cases when the distal impacted tooth is potioned at 90 degrees, it will generally strike the bone, and the eruption process is contained. At this juncture, dental surgeon will decide whether to extract the tooth or not. 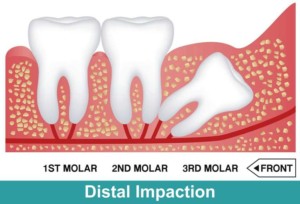 The is one of the most prevalent types of impaction. In this case, the tooth is tipped towards the front of the mouth, exerting pressure on the adjacent tooth. Mesial impactions usually result in a partial eruption.  In addition, the extraction process of this tooth is said to be the most challenging. Impacted tooth exerts pressure on adjacent teeth in the direction of the angular tilt. 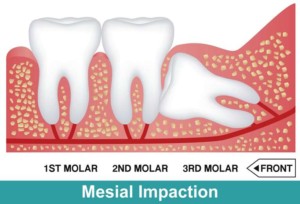